In the Torch Principle book I talk about the importance of agile methodologies. In a world where complexity and competition mutate and change so fast, we need to move fast. And to move fast, we need to have fit and strong creative muscles. We can then enter iterative cycles where we incubate insights, evaluate them and keep refining our path and pivoting towards new directions when necessary. It’s important not to confuse being agile with doing things fast. Doing things fast for the sake of being fast can degrade the quality of our output. Being agile means accelerating the creative process while making sure that we maintain the quality of what we are doing and we listen/act on the feedback we receive from others.

A useful exercise in both divergence and agility is to brainstorm an idea for a short film and shoot it in a short span of time. As part of the activities for the launch of The Torch Principle, we recently did just that. We conceived and produced a science fiction short film in less than 24 hours. The postproduction will of course take longer, but the process of coming up with the idea, writing the script and filming it, which is in itself a key output, took less than a day.

This is a great exercise because filmmaking touches so many different areas and skills. To come up with a unique and original idea in such a short time you need to have strong creative muscles. If your creative muscles are not that strong you can get there by supporting yourself on some of the tools and exercises of the book. Once you have the initial insight, you need to evaluate it, get feedback from your peers and once you craft the final version, write at least a basic script.

MindShort will be launched after the book is out

During the production and filming you will have to pay a lot of attention to the process to make sure that the quality is maintained, that the vision of the original insight is not being lost or degraded in any way and to listen and act on the feedback that you receive. That feedback can be crucial to tweak things and can make all the difference during such a fast process.

The Science fiction short film we created is called Mindshort, http://mindshort.com and it will be launched once the postproduction is completed. To produce this film our team was composed of just 3 people, two actors, me and my brother Pablo, and a third person, our friend Esteban that supported us with the camera and other tasks. 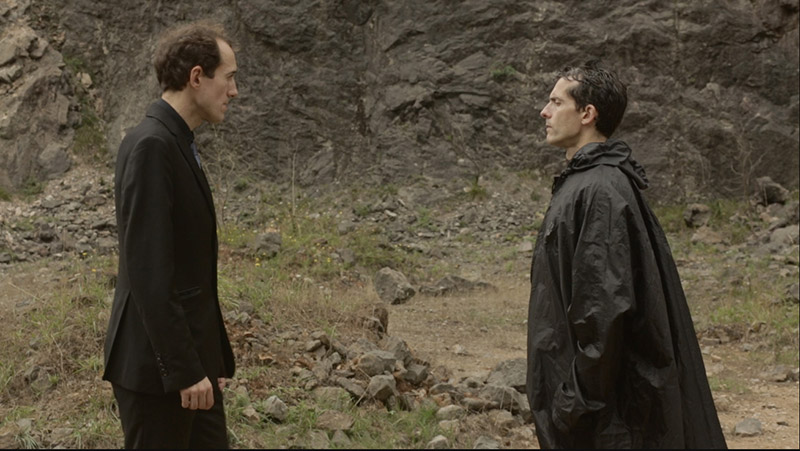 The material we used was very simple. We used a Canon 5D Mark iii camera with a few accessories. We improvised the costumes at home. One of the characters is a police investigator of the future and the other one is a criminal of the mafia. Our friend Esteban has great knowledge of the area where we were and helped us find a great location in the mountain that fit with the desolate and minimalistic scenario we were looking for.

I won’t say that luck doesn’t play a part in these improvised processes. We had to film outdoors and we needed a cloudy day to be able to shoot with as few resources as possible. Cloudy days provide beautiful diffused lighting outdoors. A sunny day would have obliged us to bring all sorts of diffusers with their related infrastructure.

After incubating and producing the idea, a basic script was written and we got on with the filming. As we rehearsed the scene we tweaked things here and there, just as you would do in any agile development process. We made sure to capture at least 2 or 3 takes of each shot and to combine master shots, which capture a whole scene or even multiple scenes at once, with close ups and short takes. After the first session, we reviewed the material recorded and decided to go back to shoot some additional stuff that could be useful for the postproduction.

I look forward to share with you the results of this improvised and very agile divergence exercise in filmmaking, stay tuned!